Through pride of accomplishment and occasional inquiry, I am including a description of my adventure in etching press design and construction. As of 2008, this 18"X38" etching press was the largest design/construction project I had undertaken and the end result was well worth the work involved in completing it. To provide some background information about this project I'll start this description with some questions that came up throughout the project, along with my responses.

Is this type of project for everyone?

If you are familiar with and have access to sophisticated power/machine tools, welding equipment, and possess the experience to operate the equipment safely, then yes. For those with more limited or nonexistent mechanical skills and tools it is possible by means of hiring out the more challenging phases of construction to develop a bolt together etching press "kit." In developing a "kit" you would need to determine if the expense of following this path will exceed the cost of a commercially available press (new or used).

At the end of this write-up I will provide links to some helpful on-line resources where anyone interested in pursuing the idea of building their own press can investigate it beyond what I have described here on this site.


What factors played a part in your decision to build an etching press over purchasing a new/used model?

There were a number of factors which pushed me in the direction I chose.

First was cost. I was in the final year of my Drawing/Painting/Printmaking studies at Portland State University in Portland, Oregon and did not want to graduate without having the means of continuing my work due to the lack of such an integral piece of equipment. New presses in the size that I wanted (18"X36" to 24"X48") were priced at $5000 or more. Please note that having now completed my press I can attest that these commercial models are worth every penny for anyone that can afford one. Unfortunately my student budget could not sustain such a purchase, making cost a major factor in my decision to proceed down this path. After the research phase I discovered I could build an equivalent press for roughly one third to one half the cost of a commercial model. Used presses could be had for less money, however one could never predict when the right press would become available, within a specific budget, and in an area of the country that permitted easy access to pick up. Shipping was sometimes an option, but even a small press can weigh several hundred pounds, so sellers often preferred to sell locally rather than be burdened with dis-assembly, crating, and shipping.

Second was the challenge. I was finishing up the last year of my Bachelor of Science degree and needed a thesis project which utilized a number of the skills I had developed throughout my academic career. I also wanted to graduate with the means to continue my printing. After extensive consideration and research I realized I could fulfill both objectives by constructing my own etching press. I had never taken on such a large project, but with the help and encouragement from my instructors it became clear that success was entirely possible.

Third was scale due to living arrangements. I live in an apartment complex and required a press which was small enough to fit through doorways and light enough to not fall through the flooring. In addition, the press needed to be designed in a manner that would allow one person to tear it down, transport it, and re-assemble it if ever a move was required when no additional help was available.

Finally there was flexibility. As with most people, quality is a big factor for me and constructing my own press provided the opportunity to integrate premium features found in a number of commercially available presses which were not available in any one press design. In addition, I had developed a sizable wants vs. needs list and at various stages of the project I discovered opportunities to move some of the wants into my design without destroying my budget. Such upgrades included powder coating instead of spray paint (more durable and provided a nicer end result), nickel plating the rollers (adds a layer of rust inhibitor to a vulnerable metal in humid environments or when working with damp print papers), and water-jet cutting the large diameter hole in the chain guard (aesthetically the best way to cut a large diameter opening in half inch thick steel plate). Often what made these upgrades possible were areas of the construction I determined I could complete without having to hire the task out, finding individuals with the skills and/or equipment to assist me at little or no cost, and discovering that certain processes were sometimes less costly than I had envisioned.


How long did this project take?

From concept to completion was about one year, however the actual construction phase took roughly four months.

The various phases and times involved break down like this:

-Three months for research in design, skills required, equipment needed, feasibility, and available plans/designs/photos/resources from other builders that had undertaken similar projects

-Two months to work on the design phase. Fortunately I had the luxury of three different press designs within our school print studio for reference. I had used these presses extensively, learning the pros and cons of each, which helped tremendously in working out a design that integrated premium features for the press I had in mind

-Four months construction. This was a busy period in which I was juggling my work (which included cutting, drilling, machining, and assembly of various components) with contracting out complex welding, heavy-duty machining operations, plating, and powder coating with local businesses. The primary challenge here was timing to meet all of the constraints imposed by the different businesses and my deadline for completion — finals week and graduation!


What software did you use to create your plans?

Microsoft Visio 2007 was the program I used to create the drawings.  I already owned the software and having used it for lighter tasks in the past I knew it was capable enough for what I needed to accomplish.  With the intention of only using the software for line drawing I quickly realized it was capable of doing more, including shading, layering, and transparency.  In addition, it worked great in allowing me to draw in exact scale to ensure individual parts would fit properly and clear surrounding parts.


The biggest restriction in using this software was not being able to create 3D drawings where I could rotate the design freely in any direction. To overcome this restriction I created a number of 2D drawings using a variety of shading techniques to create a 3D look.  Overall, this restriction was only slightly limiting and the software still provided plenty of information when I needed to visually express form and dimension to third party fabricators.

What was the most rewarding aspect of building your own press?

Ultimately, it was all the great people that helped make success possible. Their willingness to help in all aspects really stands out as the highlight of the whole project. At the end of this write-up I will include a list of all the people and businesses that helped and the role they played.


Click the link below to read the second part of this five part series:
Part 2: Specs and Research 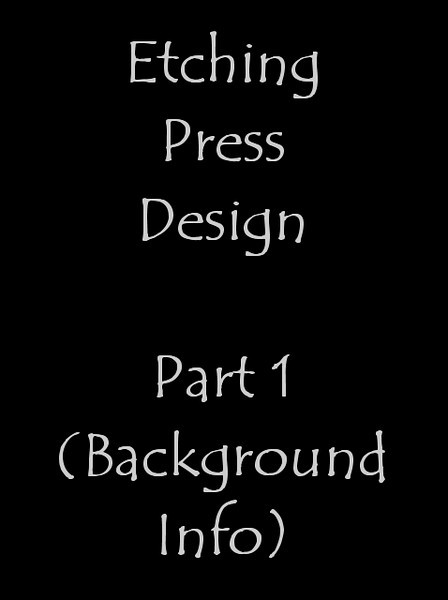